Get up, stand up! 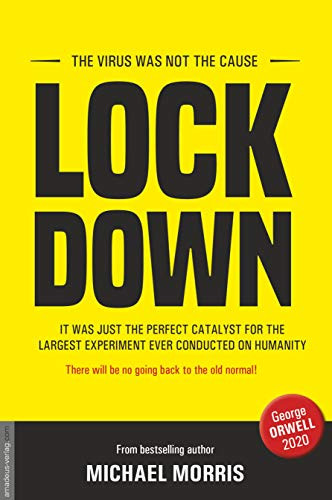 Get up, stand up! (by Michel Morris)

This is the biggest experiment ever conducted on humanity. This is what they call “The Great Reset”. It has been planned and prepared for years. The virus is not responsible for any of this. The reactions of some biased inhuman beings to it are causing all the fear, confusion, turmoil and suffering. And it will even get worse if we don’t stand up and stop this crusade NOW.

Millions of innocent people already lost their jobs, their hope and their future, and many more will in the months to come. Many people lost their lives this year but not due to a virus. Yes, the novel corona virus can occasionally cause severe damage in some rare cases, just like most viruses can. But roughly half of those infected with SARS-COV-2 don’t ever show any symptoms at all. They are completely asymptomatic.

Of those who do get sick, most recover without any problems like after every flu or common cold infection. The lockdown caused more deaths then the virus itself as most experts confirm. Even Bill Gates, godfather of this plandemic confirmed that 90% of those dying during this experiment will “not die from the disease itself!“

The fear and stress that was caused by the curfews, restrictions, isolation, confusion and job losses led to millions of people now suffering from PTSD or depression. There are not enough therapists on earth to even begin to deal with the trauma that has been brought upon us by only a handful of individuals and their puppets in politics and science. These entities have no connection to what ordinary people call their “daily life.” These beings have no feelings like ordinary humans, they lack any kind of compassion or empathy.

The virus was not the cause. This so-called “pandemic” has been long and well prepared in order to re-shape the world on all levels to the benefit of a small ultra-rich group of people who do not care about the rest. They feed upon the fear and the suffering of mankind and for them enough is never enough.

There is no pandemic and there never has been. That is not a conspiracy theory. That has just been announced by what some call the highest authority on health issues on this planet, the so-called “World Health Organization” (WHO). They just guessed that about 10% of the world's population might already be infected with SARS-COV-2. Truth is that probably two to three times as many are already infected without showing symptoms. But let’s just stick to their numbers and their narrative for now to not create even more confusion.

10% of 7.8 billion people make 780 million people, correct? Since the WHO experts also claim that by now a little over 1 million people have died in connection to the virus this makes for a mortality rate of 0,13%. That is not a pandemic. And when you remember that the WHO had estimated a likely death rate due to COVID-19 of 3.4% in March the “experts” sponsored by the Gates and the Rockefeller Foundation were only off by 2.600%. Did I miss their apology?

In March 2020 the Italian Minister of Health himself admitted that more than 99% of Italy’s alleged "coronavirus victims" (that made headlines all over the planet for weeks) suffered from one or several pre-existing conditions. 76.1% suffered from high blood pressure, 35.5% from diabetes and 33% from heart disease. This means that only 0,0013% of those who supposedly died from COVID-19 were healthy people. Does that justify a worldwide lockdown? Wouldn't it make more sense to only protect and isolate those who are really at risk and let all the others, those with a strong immune systems and with good health go on with their lives? Wouldn't it make sense to let them go to work, so they can pay taxes and therefore support the others who are may be in danger? Yes, that would make more sense, but that is not what this is about. This grant experiment is about reshaping the political, economical and monetary system and to replace elected governments by a privately selected global board of “experts” that only answers to their masters, which I call the “Secret World Government”.

But the WHO not only recently announced that there is no pandemic, they also confirmed what most of us already knew: that lockdowns make no sense what so ever. Actually it only took them 7 months to figure out “that lockdowns are bad for the economy.” I am deeply impressed by their expertise. And yet the next wave of lockdowns is on the way. This time called something else. They are different everywhere, with different rules and restrictions, varying not only from country to country, but even from county to county. In Berlin, Germany, even different parts of the city have different rules – and they keep changing day by day. The same goes for Madrid. Different Spanish islands have different rules and they all are different from the mainland. Portugal just announced another complete Lockdown and in the Czech Republic restaurants, cafes and bars are closed since last week while everything else is still open. This new strategy serves to confuse and frighten people in order to weaken their resilience. This also weakens their immune system and makes them even more susceptible to all kinds of infections.

It was clear from the beginning that the lockdown had nothing to do with the Chinese virus, which by the way was designed in the level-4-lab in Wuhan with the help of US scientists – I have proven that and given all the references needed to understand what is going on here. We are talking about a bat-corona-virus genetically manipulated with human DNA, all of it openly and proudly published by the very scientists who created SARS-COV-2. They had also warned in 2019 about it potentially getting released. That is just for those among you who still argue that we wouldn’t know the origin of the novel SARS virus for certain. We do and the proof is out there.

Yes, they knew from the beginning that a lockdown could not solve anything. We clearly saw that those countries with the hardest lockdowns ended up with the highest rates of infections. And countries like Sweden or Iceland who had no lockdowns at all did much better than countries like Spain, England or the US. But then again the number of infections depends on the level of testing and the inaccuracy of those tests – some produce five times more false positives than there are infections.. That way those “experts” can create a new wave just as they please.

Even if you believe in the official data, what does it mean that by early October 2020 one million people were supposed to have died already “from” the corona virus worldwide? Did you know that over the last years 150.000 people died worldwide EVERY DAY? That means, 40.5 million people have died in the first 9 months of any given year. As we have seen above, 99% of the “corona related deaths” did not die from the virus, but even if 1 million out of 40.5 million had really died from the virus that would never justify putting billions of people into isolation, destroying them mentally and economically.

If more and more people meanwhile understand that this is not what they claim it is, how come some of us are still under the first lockdown, while many others in Europe are already experiencing the second lockdown this year? How is it possible that those who are responsible for these catastrophic decisions are still in a position of power, able to decide what we are allowed to do and what not? The answer is simple: because most people are cowardly! Most people neither want to hear or talk about this any more. They either already suffer from PTSD or worse, they hope that this will all be over soon. They think that they can just sit it out like a storm or a flood. They don’t want to get into any kind of trouble. That is exactly why the trouble will get worse. Unlike any weather phenomenon this experiment will not have a natural end. That is not to say that all recent weather extremes were of natural origin, but that is a different story. If you think resisting these fatal measures and restrictions means trouble you are suffering from delusion. The real trouble will come over the next months if we don't stop those psychopaths currently calling the shots. If we don’t stand up for ourselves NOW there will soon be nothing left to stand up for.

There are millions of people demonstrating peacefully against the lockdowns and they need your support. There are courageous doctors, lawyers and virologists all around the world currently fighting against the completely excessive and counterproductive corona measures. They are not only doing this for themselves but also for you and me. And they need our support. They need our financial, mental and physical support.

More than 34,000 health experts from around the world (doctors, practitioners, health scientists and many more) just signed a declaration against COVID-19 Lockdowns. And there are more initiatives that you can support. If there is anything you want to do to regain your sovereignty contact them and offer your help. The best, most effective and easiest thing we can do is to confront our local politicians, mayors, representatives with our concerns in order to build up pressure.

Politicians are being pressured from above to enforce restrictions onto the people in their surrounding, and not all of them like what they are currently forced to do. But politicians always take the path of least resistance. If the pressure that comes from their voters grows bigger than that of Bill Gates and his like minds this whole nonsense will be over soon. That is the way to redirect the flow of energy back to it's origin.

We need as many people as possible waking up, getting up, standing up for this to work. It is as if Bob Marley had seen this coming decades ago already: Get up, stand up, stand up for your rights! Get up, stand up, don't give up the fight! If you don’t want to stand up straight like a free human being, if you don’t want to fight for a just and peaceful world for yourself, do it for your children and grandchildren. Do it for those who can not do it themselves because they are locked in or handicapped or too young or already so stressed out that they have no energy left and can’t move. If you are among those who still can get up, who still can think straight I urge you to act now. If you ever asked yourself what you are here for, you might have just found the answer. May the force be with us!

The new book LOCKDOWN by bestselling author Michael Morris is available on Amazon US, Amazon UK and Amazon Australia.